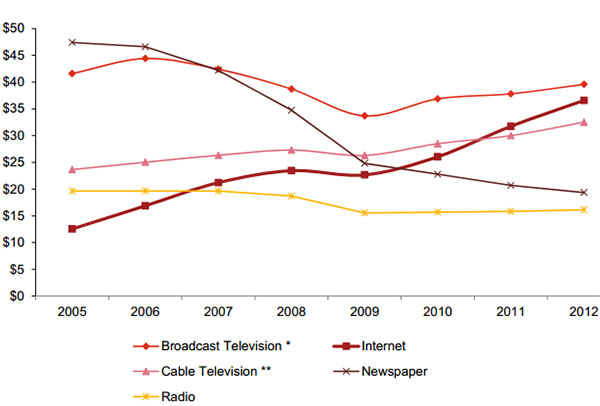 You will find more statistics at Statista

There is no question that Google dominates the online ad revenue  market and therefore is an important factor to consider for businesses looking to advertise online and connect with their markets through digital channels. Though there are dozens of viable tactics to use Google and its services such as YouTube to market a business online, there are two fundamental approaches: paid  and organic. While organic is tied to Google search, paid can include things like contextual online display advertising through partner websites and re-marketing.

The IAB Internet Advertising Revenue Report was initiated by the Interactive Advertising Bureau (IAB) in 1996 with updates published quarterly.  This report is conducted by PricewaterhouseCoopers LLP (“PwC”) on an ongoing basis.  Below is an excerpt of their latest report (at the time of this post) comparing the H1 2012 US online ad revenues to H1 2013 revenues. It appears that someone forgot to tell advertisers that the US is in a period of slow economic growth!

Compare the 18% growth YoY growth rate in the US Internet advertising industry with the annual growth rate of the overall US Economy at around 2%. By comparison, the online ad industry appears to be not only healthy, but thriving. Companies like Google and more recently, Facebook, have become large benefactors of the thriving Internet advertising industry. But has the last 12 months growth rate in online ad revenue been an anomaly or is it part of a larger growth trend?

As demonstrated by the graph below from the latest IAB Internet Advertising Revenue Report, we can see that with a sustained, compounded annual growth rate of 20%, online ad revenue is indeed enjoying consistent YoY growth over the last decade.

We can see that the biggest growth area in online ad revenue is in mobile ad formats, growing from just 7% in the first half of 2012 to more than double that at 15% in the first half of 2013. This means users are interacting with a greater percentage of online ads formats through their mobile devices. Surprised? Therefore, having a business website is no longer enough. A business website needs to be mobile friendly as users who click on an online ad are increasingly doing so from mobile devices. It is reasonable to assume that these mobile users will expect that the web page at the other end of the ad click is going to perform well on a mobile device. User-friendly pages with ease of navigation are among the top mobile user criteria for evaluating websites on mobile devices and will impact conversion rates and mobile ad ROI.

Still not convinced that you need to be paying attention to mobile users and how best to connect with them? The following chart was from a Internet Trends 2013 by Mary Meeker presentation delivered at D11 on 29 May 2013. This chart is highlighting the disparity of % of  time spent by media type versus advertising spending in the USA in 2012.

It is clear from the data that the % of ad spend for print and radio is higher than the % of time spent on those media types. A question any advertiser is whether or not those traditional channels deserve such a premium in terms of % of ad budget relative to newer digital channels, which are increasingly where individuals are consuming more of their media. By KPCB estimates, this imbalance of ad spend vs time spent per media channel represents a combined $20 billion growth opportunity for Internet and mobile online ad revenue growth.

Trends in Advertising – Revenue Market Share by Media Over Time

Ad Revenue Market Share by Media Type from 2005 through 2013

Besides the newspaper industry, radio has seen the most pressure on its ad revenue market share between 2005-2013. While many businesses have a long track record advertising in traditional channels such as newspapers and radio, now more than ever to expand their integrated marketing plans. In order to accomplish this, businesses will either invest in grow existing marketing resources with digital experience via new hires or train existing resources to leverage online media channels. The alternative is to outsource digital marketing to agencies. Either acquiring the digital marketing skills in-house or outsourcing to an agency can help ensure businesses reach their market in the context of their current  media consumption.

Global online ad revenues are currently dominated by Google, with the social behemoth Facebook a very distant second. Online ad revenue in the US has been growing at a 20% compounded annual growth rate since 2003. Mobile ad formats are leading the growth in online advertising. Mobile ad formats have a lot of head room for growth given the disparity in % of ad spent by media type vs. the huge growth in media consumption on mobile devices. This growth in mobile comes primarily at the expense of print and radio ads.

Though many businesses are more comfortable with traditional media and its track record of producing predictable results,  the data presented here should provide food for thought. For  some, this data will provide a strong incentive to evolve integrated marketing plans to align with well established trends in media consumption.